Building the Stairway to Heaven 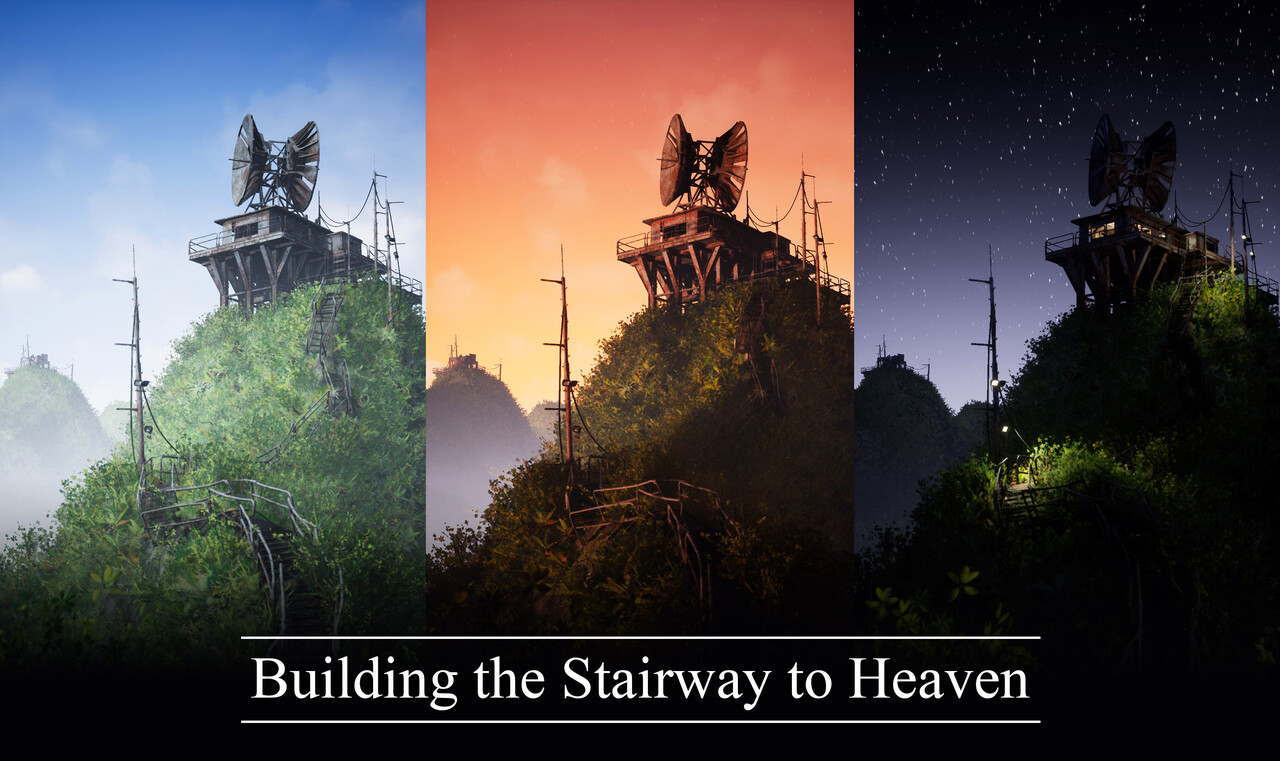 Whilst browsing the Internet I happened across this image and immediately thought "that would be a cool environment to create in 3D".  It doesn't require that many assets to be created, the texturing is split between two main areas and thick fog covers the distant background. It will take me no time at all to make this! That was a year ago.

Fast forward to now and the project is finished. As you can probably guess it didn't go as smoothly as I first anticipated but I did learn a lot about planning, time management and keeping the main goal in sight. These things are so often overlooked so I wanted to write a blog post on how you can best manage your own projects. I'll be using this project as a case study and to better illustrate my points.

There are a couple of reasons why this project took so long to complete. Firstly, it was completed through live streams only. I've found live streaming to be a very effective tool to actually committing to doing my own personal work at home. It's not for everyone, but it did force me to stick to a schedule and a time limit.  Knowing when I was streaming (working) helped me plan out my time more efficiently. If you're interested in seeing one of my creative streams join me over on Twitch, Tuesdays and Thursdays at 7:30pm GMT.

Secondly, I started and completed a timed competition environment during this project. While working on my "Beyond Human" environment I paused work on this project. The reason why I chose to do a timed piece in the middle of this project is because I knew I was purposely shying away from areas I don't have much experience in. Working on timed projects (with fixed deadlines) forces you to pick up new techniques and to learn more quickly. I used "Beyond Human" to push me out of my comfort zone in Unreal Engine 4 which, in turn, I then applied to the the Stairway project.

During production of "Stairway to Heaven" I took a screenshot of what I had been working on after every stream to show viewers where I was up to. Below is the complete  project progress image (containing every end of stream image). The blue numbers give you an indication of progression: 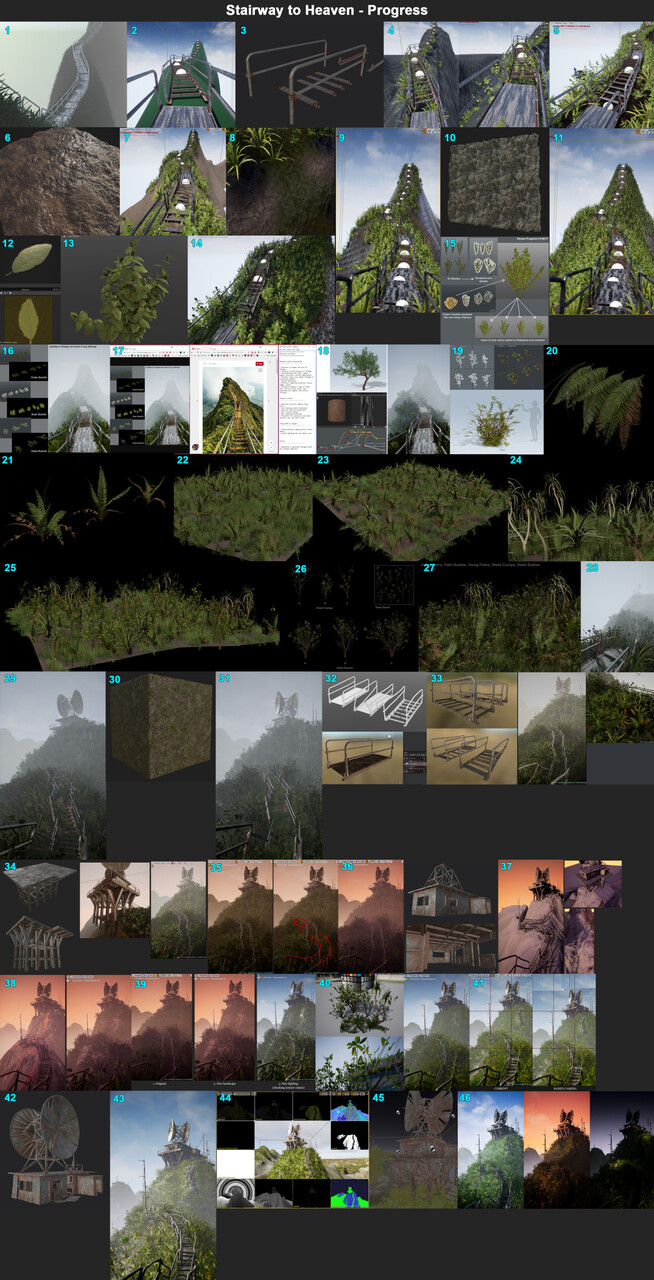 As you can see the project went through a few forms before becoming the final finished version. Now this doesn't look like a lot of work but if we multiply the number of images by the amount of time I stream for then we get a rough idea of how much time I spent on the project:

Seventeen days is a long time to work on a relatively simple environment! It's worth noting that this time takes into account all the problems, errors and issues I ran into along the way. No one gets through production without hitting a problem at one stage or another.

Now let's look at how much of what I created ended up in the final environment: 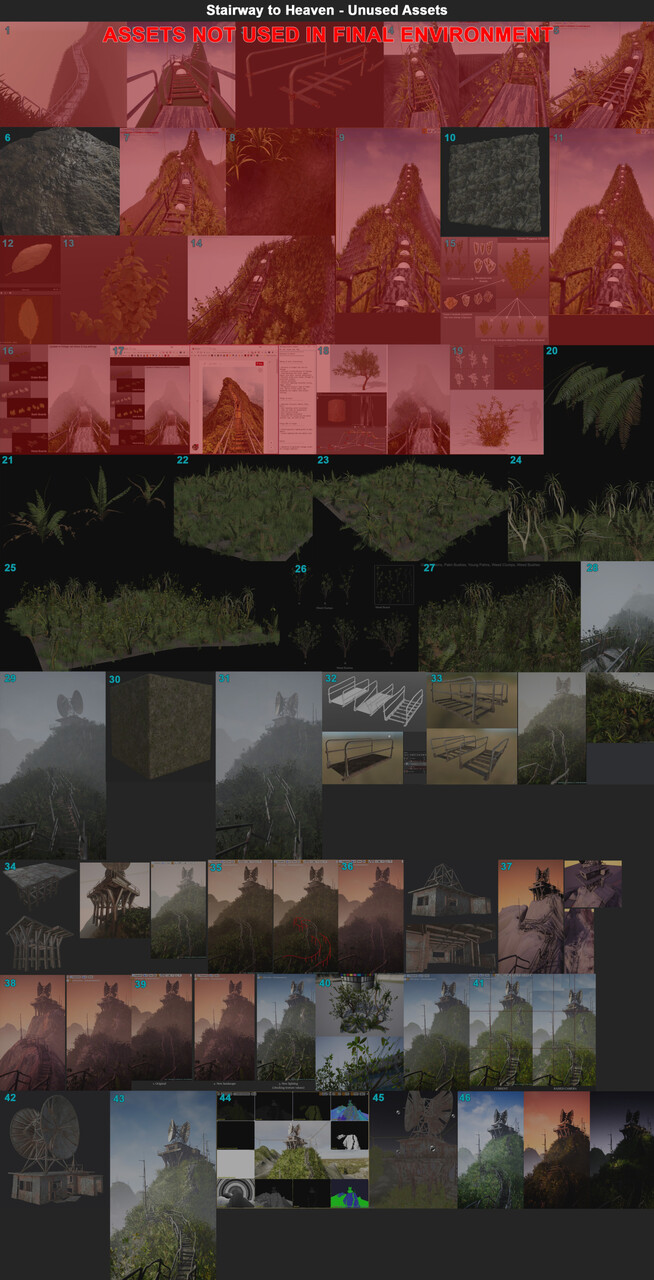 Almost half of the progress I made didn't actually make it into the finished environment. I rushed into creating assets without thinking about what it was that I actually wanted to create. Not having a firm idea of what you want to create or achieve will come back to haunt you later in any project.

As I shied away from locking down a firm idea it (inevitably) led to experimentation with no real purpose. In this early stage I tried using other pieces of software and new workflow techniques to learn something 'new'. This was all to no avail as none of it made it into the final version and a lot needed re-working. It did teach me a valuable lesson though: don't rush after shiny objects.

If we took the time that I wasted off our current total we're looking at the project taking roughly 87 hours, or almost 11 (8-hour) days. This makes the project length a lot more reasonable and manageable.

So lack of forward planning and early, undefined experimentation led to the project taking longer than usual to complete. What else contributed to this? Losing sight of the end goal/project aim will also cause issues. By taking a step back during production and re-assessing what we're creating we can really see (and question) if things are moving in the right direction. Below is the same image but annotated with my thoughts (this was done after completing project): 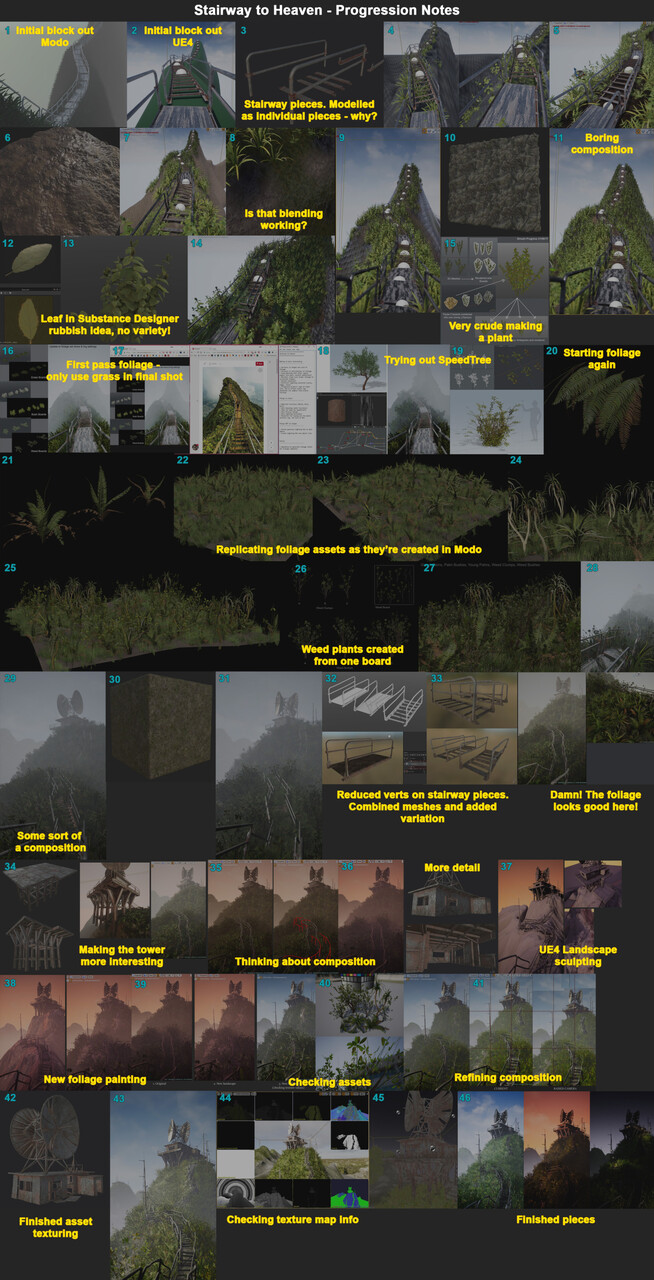 As you can see, made a lot of extra work for myself.  Some assets were too detailed, some I started but didn't finish, I tried new techniques that were later made redundant, I didn't lock down a composition until much later in the project, etc. All classic mistakes that a lack of planning leads to.

Now let's take a look at the order in which I would do things if I was to create this project again: 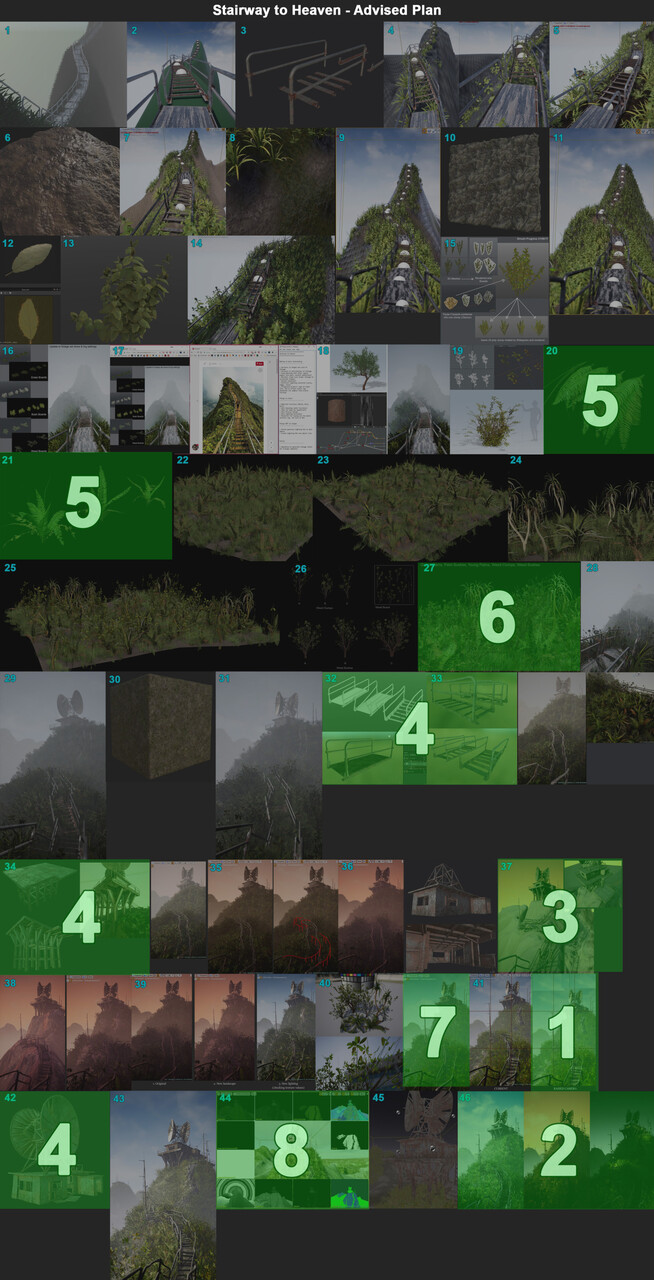 As you can see I made the environment in the wrong order. Only at the end did I refine the composition or attempt the lighting. Forcing yourself to look at the environment as whole (steps 1-3) with placeholder (or blocked out) geometry really helps you gauge exactly what you need to create. Much like play testing games, the early you can see the thing as a whole, the easier it will be to see what is and isn't working.

This project was an unwieldy beast that could have been completed sooner and better if I'd spent more time planning what it was that I wanted to achieve. It was huge learning experience of how not to do things but I am glad that things went the way they did as I wouldn't have learned as much as I did. In conclusion, I will definitely be devoting more time to planning out my future projects!

Disclaimer: This 'defined' planning process works well for me because I organise my time into chunks of work. This won't work for everyone but I would recommend giving it a go nonetheless. Getting into the mindset of planning ahead will help you later down the line with anything that you're doing.

Moving forward I thought it would be good to create a document that I could use in future projects to better plan my time. Upon completing the Stairway I thought about other information that would be beneficial to note down too. Having all the right information in one place while working on a project and to reference during production would be really handy. This led me to create the project planning sheet below: 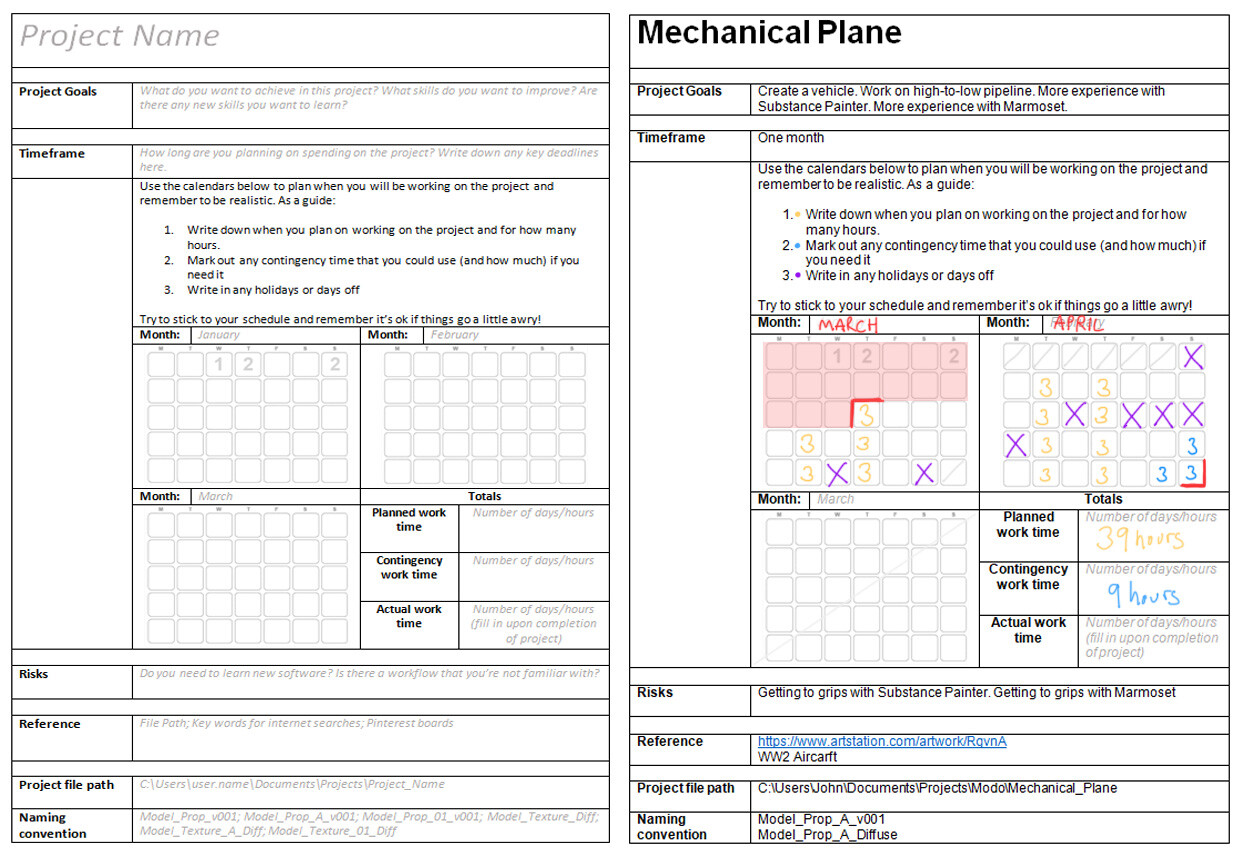 A blank version of this can be downloaded from my Gumroad page. I decided to include a version of the sheet filled in (with my current project) so you can get a better picture of the sheet in action. It's working well for me so far and I hope it works for you too!